Well taking a break from makeup reviews , I would like to show off some of my Elden Ring pictures. I started playing as soon as the game came out, and play online with both my friends and my fiancé. If you’ve ever played Dark Souls or any From Soft games you’ll definitely notice the familiar leveling system, gigantic and sometimes brutal boss fights, and challenging gameplay. or wait is it really that hard though? It is if you’re a newbie or if you’re like me, someone who takes their time doing stuff in games. I’ve only ever played parts of Dark Souls 1 and usually just watch my fiancé play. He’s beaten all three Dark Souls games , tried Seikero ( he didn’t like it as much , but it’s on the pc so it’s still there to play) and the numerous Armored Core games ( which are a lot harder than Dark Souls). So it was time for me to try out my own fromSoft game start to finish. 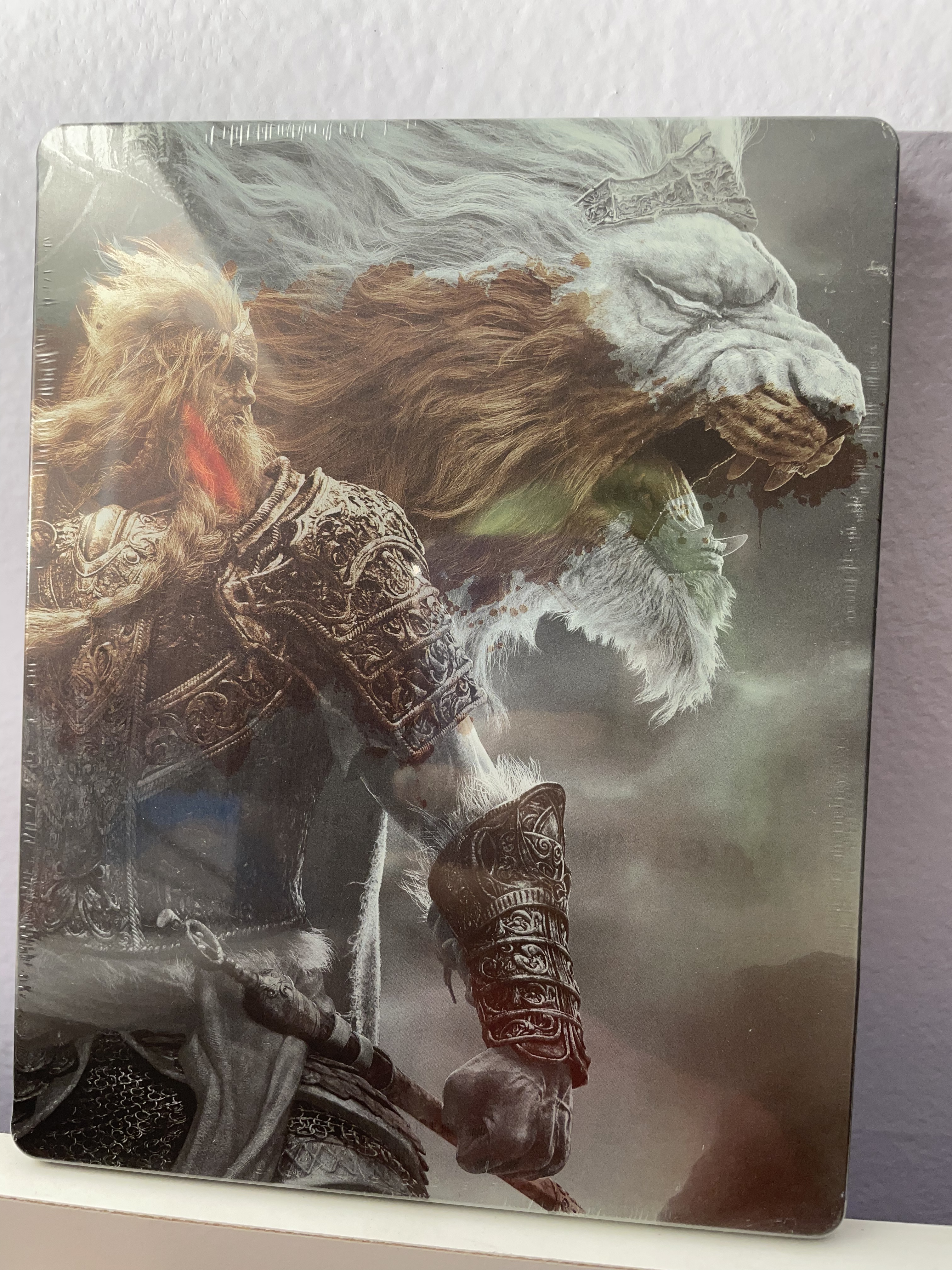 Excuse the flash. I didn’t want to remove the plastic from the steel box case.  My fiancé pre-ordered the special edition box but with a download code. So as soon as the game released , they sent us the code and later the case . It’s more or less a collector’s item, so not really any reason to open it. The cover features one of the end bosses Hoarah Loux along with his lion, Serosh.  I still need to fight him later. As of writing this review I’m currently still going through quests and boss fights.

I loved taking selfies on my horse. Or is he a cow. Everyone in the game call’s Torrent a horse but he looks more like a cow that leaps. like a goat or deer

The character creator is pretty standard, I know some people have made amazing characters that look like models or themselves, but I decided to go ahead and roleplay as barbarian lady. I like using heavy weapons in games usually, and was happy to choose the class with the ax. And somehow I made her look similar to a character you meet later on in the game named Nephi Loux. I actually really liked Nephi, but decided on childish barbarian name of Fanny. Sadly this was terrible in multiplayer as the game censored my name. I’m not exactly sure why as I played with a player named Booty, but Fanny I guess was too much for people lol.

The world of Elden Ring is beautiful, disturbing, sometimes scary, and even manages to have whimsical moments. Now Dark Souls itself was a very Dark Fantasy game with horror elements, and even it had nice little characters, and beauty. This game has that feel but maybe less focus on the dark . There’s still lots of cosmic horror though, and some characters you meet have pretty sad fates that can’t be changed. But the game overall feels beautiful. Limegrave is lush and green with streaks of gold in the sky, a large tree with golden branches are in the distance. And you get to explore this area. Like yeah sure there are undead and giant man eating bats, giant trolls and monsters too, but it’s still really nice. I actually took waay too many pictures and have tried to restrain myself to only posting the nicest ones or most unique. 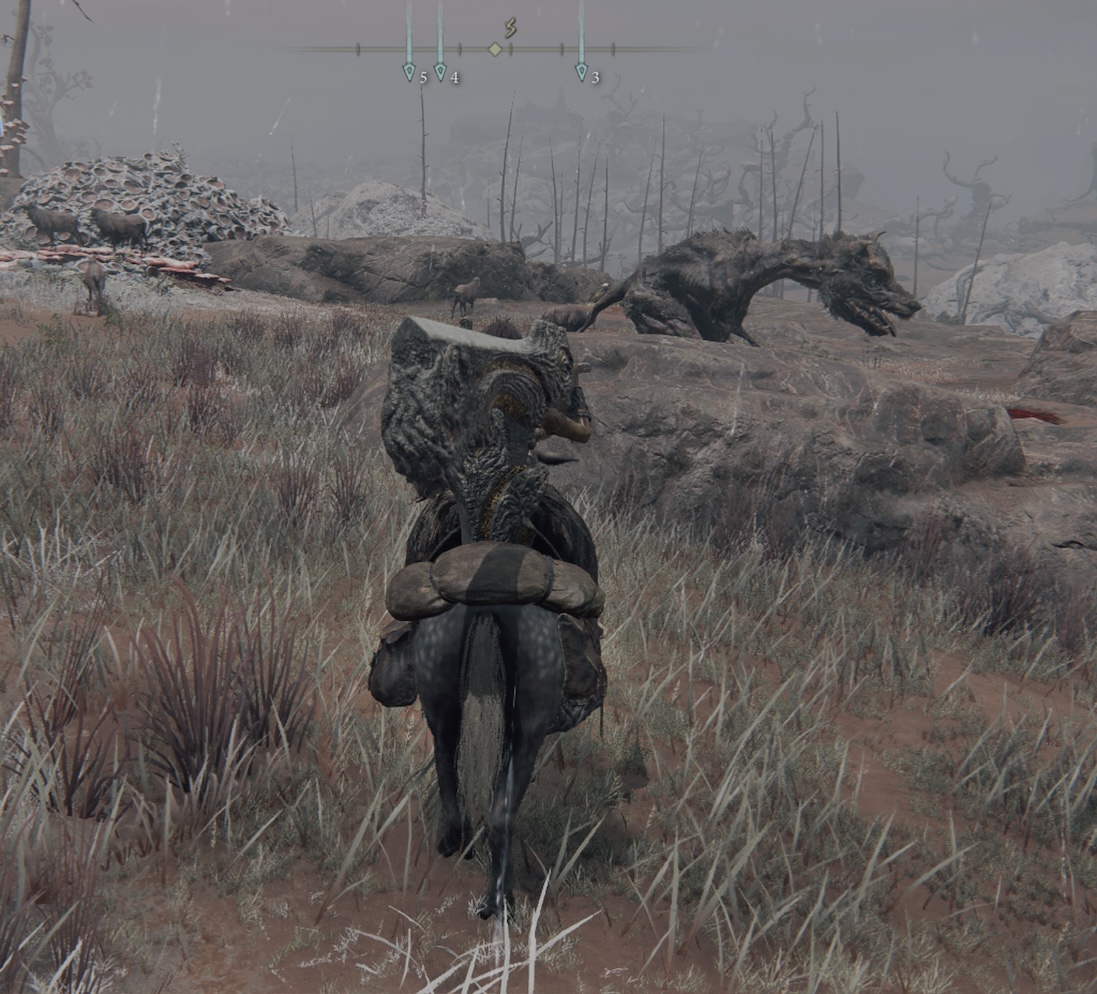 The majestic Caelid dog or Tyrannodog pictured above. It’s best to enjoy these dogs from afar as they’re pretty vicious. 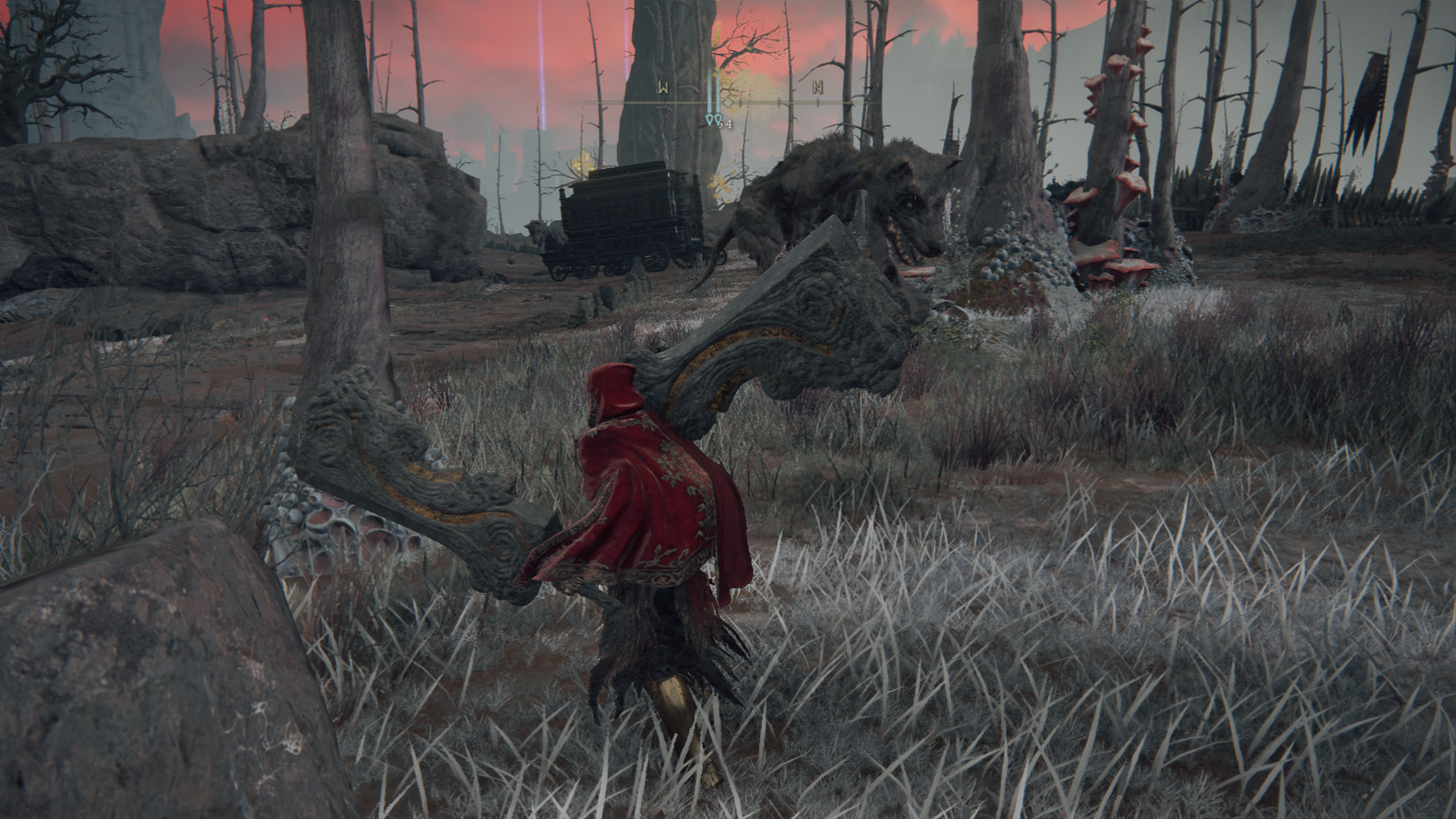 Looks like my second visit, and here you can the tyrannodog’s face a little better. And the beautiful sunset in the background.

And flaming cars and scary dogs !

There’s even a wolf man. 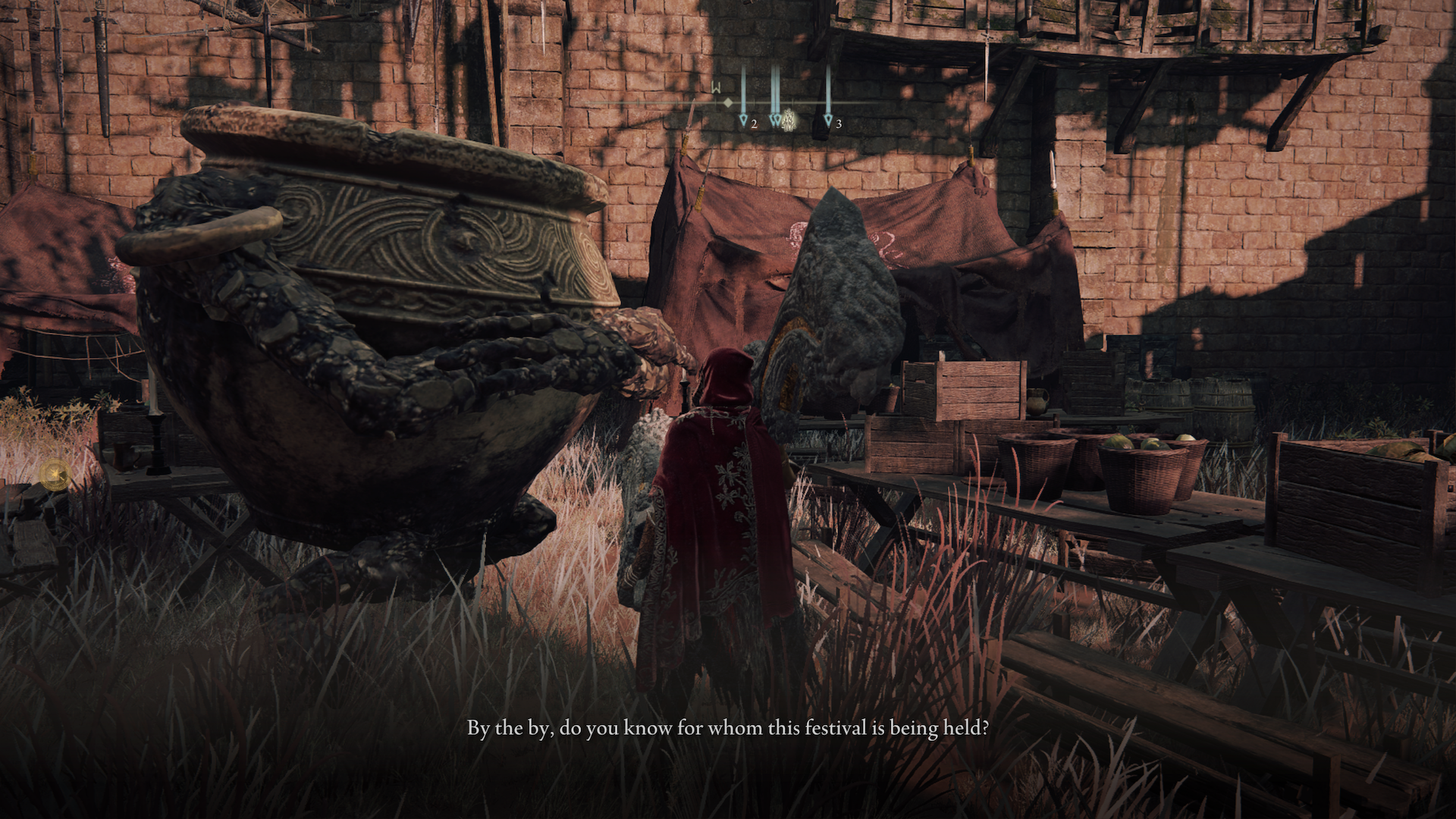 And a friendly jar too ! I love Alexander! he was super nice.

The boss fight’s are super impressive . I managed to take some pics of Starscourge Radahn, (sadly none of his tiny horse, Leonard) and Rykard Lord of Blasphemy . I sadly neglected to take pictures of Rennala the Moon goddess, but her fight is pretty fancy. Also I still need to fight Malenia too. So  I may post more in the future.

So now that I showed off some of my gameplay , I wanted to end it hear as not to make this a super long post. I will however be sharing a separate post that shows off some of my adventures, characters and bosses . I didn’t get to fight every boss in Elden Ring, as there are so many, but I’m working on completing the game, finishing up some quests , and other things. I will say this game is gorgeous, the bosses look amazing and the creativity with the FromSoft team is certainly impressive. I would encourage everyone to check out this game as it can be loads of fun exploring, fighting and the multiplayer scene is pretty fun as well. Also be sure to read all the descriptions on items , as the lore is sprinkled around and can be hard to miss.

And about the multiplayer, it was pretty fun, but at the beginning there were some issues. Like summoning in friends in certain areas like Nokstella and the Rennala fight. You couldn’t leave a summon sign and it could be pretty frustrating. But thankfully much of these bugs have been fixed. I also liked the invasion function too, as it was pretty funny to have one or both of my friends hide and then surprise the invading player. Plus Gravity magic is just really fun to spam too. 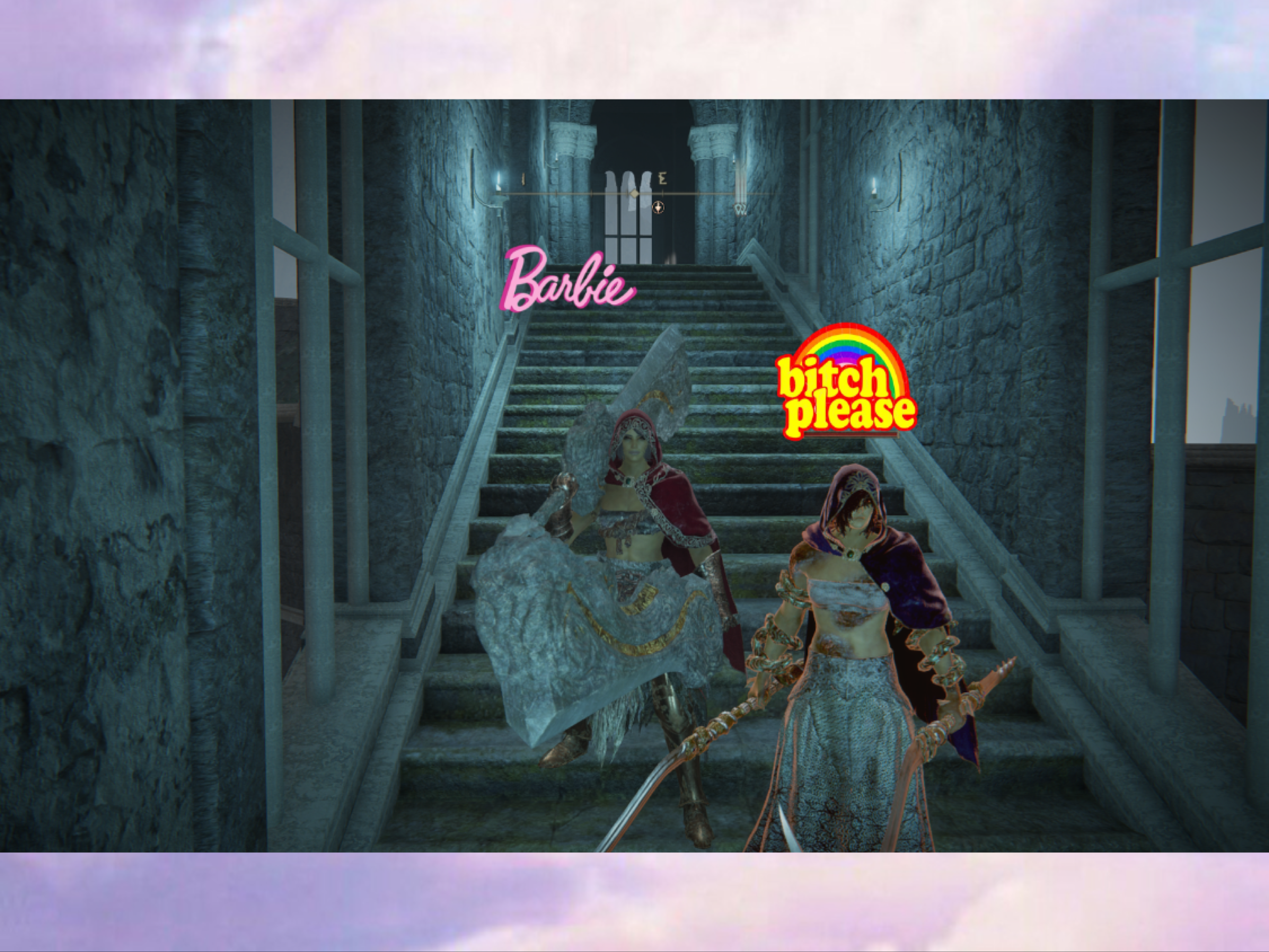 My friend and I looking fabulous !

Overall I have a lot of fun playing this game. It’s got some amazing scenery, neat looking bosses, and challenging gameplay.  Even though I prefer the heavy swords, I do have to sometimes change to a crossbow, some crazy peeler weapons, or a magic staff . The multiplayer is fun , and mostly stable on xbox series S. There’s only been minimal bugs on my gameplay, which sadly I lost an amazing video of my character lifting a giant lobster of the ground. This was an obvious bug but sadly I lost the video.

I would definitely recommend this game for anyone looking for a challenge, or they just simply want a really epic fantasy game with multiplayer features and cool bosses. Let me know what you think and if you’ve played Dark Souls, or Elden Ring before.