I thought I would go ahead and write my first game review , as most of my time being quarantined has been spent playing Animal Crossing . A little backstory too , I only really played New Leaf before , I had borrowed it from my aunt . So all the villagers and village layout were hers , I only really planted flowers and trees , and worked on my house . So it didn’t really feel like my custom village. This time around though , I had full control of which villagers I invited ( for the most part ) and village layout . So lets dive right in .

One of the really nice additions to this game vs New Leaf is how custom you can make your character . Starting out you have a nice selection of skin tones , eyes , hair styles , mouth shapes , and nose shapes . Way better than New Leaf where you could only be darker if you tanned in the sun . I started out with a girl close to my shade and long grey hair . My Fiancé also played on his seperate account, ( we wanted seperate islands so we could customize them). He chose a female character as theres usally more clothing options for girls . Well usually , of course in Animal Crossing clothes are not gender locked , so its pretty fun mixing and matching .

After setting up my character , I was able to head out to my new island and meet my two starter villagers. So for every new game you start off with a Uchi( Sisterly) character and one Jock(sporty) character . Its all completely random on which two they will be . My two villagers were Reneigh the Horse and Coach the Bull( or water buffalo). I really like Reneigh as I love horses and I read somewhere that her design and hairstyle is based on Rihanna’s. In fact in Japan her name is Rianna too , but it was changed for the Western release.  Coach I’m not the biggest fan of , his aesthetic is bit odd and he always gives kind of horrible gifts like toilet plungers 😓 So yeah . Afterwards I went online and invited some friends over !

So the online experience is actually pretty fun , but the in-game chat can be incredibly slow . I was playing in Twitch on my Fiancé’s channel and used a Dodo code to invite a few people from the chat to come over . The most people I had visiting was 4 but I hear you can have up to 8 people online. Of course there are certain restrictions, like you cannot decorate your island while visitors are over or place items in your house . But you can throw things in storage or on the ground . Plus only best friends can be able to say dig up trees and certain things . For communicating I suggest a messenger app , or if you’re playing over on twitch with a mic it a lot easier to talk . I do believe that Nintendo has a phone app for Animal Crossing messenger that works a bit better but I have yet to download it . Overall I still like playing online with my friends , going over and seeing thier houses and villagers.And especially during the whole Coronavirus lockdown , it is pretty nice seeing friends from other states even if its just on Animal Crossing . Before I forget , the games does occasionally bug out during online play.When someone is arriving its important to just stop what you are doing and not open any menus since it can corrupt your game . Same goes for when I a player is leaving . And I recently had an issue where I was visiting a friend and my character just froze . This was kind of annoying, but thankfully my game didn’t glitch out too much.

My favorite thing about this game is how differently people can play this, some of my friends have full sized houses , with tons of decorations . While others will spend more time on collecting fish , bugs and fossils . Or others have used the custom design creator to make special clothes and banners . Myself , I’ve focused a bit more on planting trees , flowers and finding plots of land for villagers to move in . I usually spend my time trying to collect Nook Miles Points( its a separate currency than the usual bell system). The these points you can but special island decorations , clothes , house items and Nook Miles tickets. The tickets can be used to go to different islands , find new fish , flowers, fruit , and best of all new animal villagers. Of course I did manage to get my miles to zero the other night looking for a new villager and I was pretty sad afterwards. I was being waay too picky that day and passed up a cute elk, alligator and tiger. I really wanted the pink octopus, Marina  or the Strawberry shortcake rhino , Merengue. So yeah its a bit like gambling when you go island hopping sometimes. 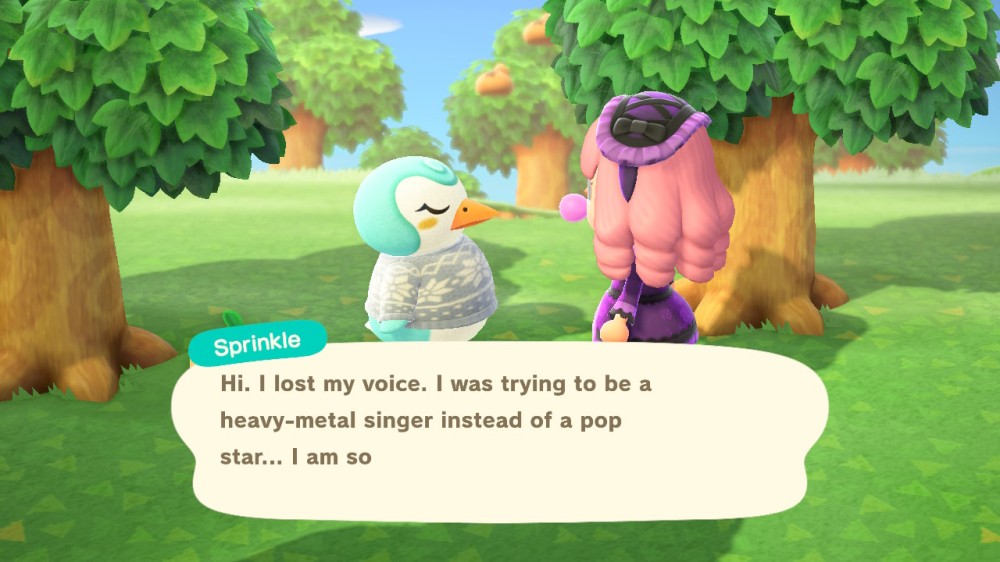 My first time island hopping I didn’t find the villagers I wanted it . I’m pretty picky , as I like the wolf villagers, horses, crocodiles, octopus and cats. So far the only ones from that list that I’ve found have been wolves and one horse . My Fiancé was lucky and found an octopus, horse and an anteater in a row . Plus one of his starters was an alligator . He’s super lucky , of course he has completely trashed his island , and its a complete mess . But thats what he was going for , having an island full of garbage 😂.  I did eventually run into the same anteater that he has , of course she’s actually a cute pangolin.  And then there was a few uninvited villagers . Now alot of people online have complained about this mechanic in the game . If you have a plot of land and don’t invite a villager , Tom Nook ( the little raccoon dog business man) will straight up invite some random animal. I found this out after I found a cute penguin and girly goat to my village. I couldn’t find a third animal that I liked so the next day another goat moved in . I was a little perturbed as I wanted something else but I did something slightly mean . I started hitting him with a net and ignored him most of his stay. Which was like two weeks or so . And he eventually moved out thank goodness . But one of the other tasks in game had me build a camp to invite more villagers over. Which I’m like okay cool . But then I learned that whoever the first visitor is you have no choice but to invite them 😢. And of course it was a smug bird who thinks he’s better than everyone. He’s definitely being ignored to the max.  Otherwise I’m pretty happy with my new villagers that I found on the  mystery islands.I would love to find Ankha the Egyptian cat , Merengue the strawberry short cake rhino or one of the cute deer characters. I mean I know there are Amiibo cards but they can be pretty pricey at the moment .

I’m still in the process of decorating my house and paying it off. This is a pretty fun part of the game honestly. Its sort of like the Sims, but not as complex. Items, wallpapers, flooring and decorations can be bought, made , or found in the game. But what’s nice is if you have a few friends online you can find even more cool wallpapers. The game’s Nook catalogue has a feature where you can buy or send items that you have already. So it really encourages you to play with your friends and trade items. I believe more sought after items can be looked up on a site called Nookazon where you find other people to buy from or trade with. I believe this is with in game money though, I’ve never been on Nookazon but I hear this is how people can find rare villagers or turnip prices too. 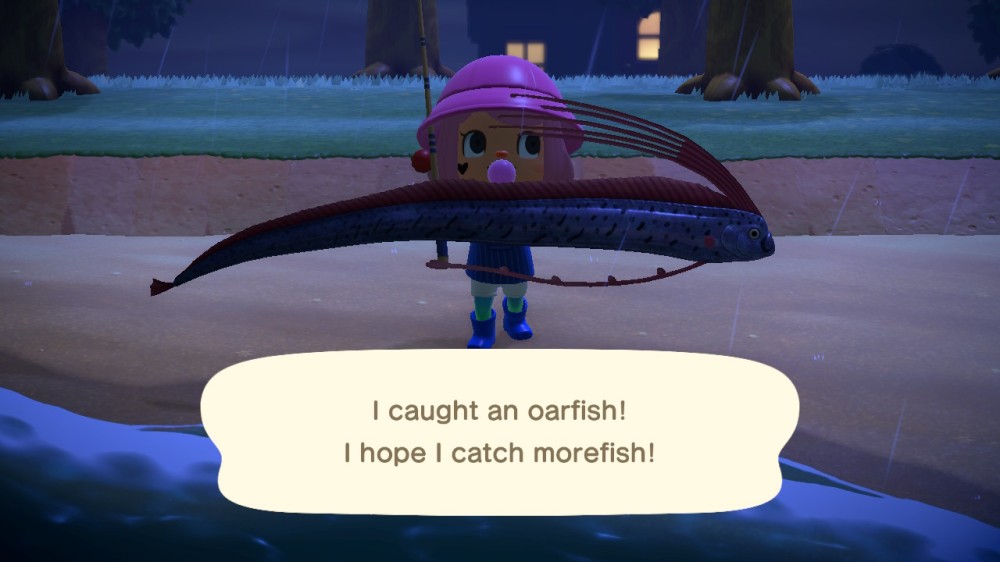 I guess I should probably explain Turnips as well. I haven’t really done too much with them as I don’t play the game on Sunday. But the that’s the day the turnip salesperson appears and you can buy from her. Now the worth of the turnips change depending on the day, and it fluctuates. Its a bit like the stock market for the game. Also everyone’s Island usually has a different value for Turnips , and this can be great if you have alot of friend’s online. But I don’t really bother with this part of the game too much.  I make most of my in-game money selling fish, fruit, bugs, items that I craft, or visiting another friend’s island to sell my native fruit.  But for those that want to really mess around with Turnips and that don’t have too many buddies online I would suggest joining a Facebook Animal Crossing group or Nookazon. Most people on those platforms will let others know when their Turnip prices are high and will usually open their gates up. Also turnips do rot after a week , so its best to buy with caution if you don’t plan on selling them right away. Or you can eat them which is what my fiance’ accidently did with his

They really like hanging out and singing together . It honestly kind of surprised me as I thought Roscoe was supposed to be a cranky character . #animalcrossingnewhorizons #nintendoswitch #roscoeanimalcrossing #anabelleanimalcrossing

So I feel due to the nature of this game , and the fact the developers are still doing updates , I will probably be playing this for a year. And some of the features such as the landscaping tool I just haven’t played around with yet.  So its a bit of ongoing review for me . Overall I really like the game , the collecting aspect , the customization of your village and character , plus the overall casual gameplay has me hooked . I do like the online play too , but wish it didn’t bug out sometimes . I’m still playing this on a regular basis , and as of today have successfully had the bird move out , and invited a snooty kangaroo over .I’ll probably post some updates later this year on how my little island village is doing . Overall I definitely would recommend the game , its great for casual play , and everyone can pretty much go at thier own pace . It can be really fun playing with friends online , even with some bugs with the online servers . Plus the animals are very cute and theres something for everyone . Its definitely worth it if you have a Nintendo Switch and you want a nice calm slice of life game .