So I saw this online and was like this is a really pretty. I showed a few online friends to see what they thought and they pretty much said you should get it.  Thanks alot to @onlyveebee for answering some questions about Revolution palettes. She did a great review of the Forever Flawless Chilled palette. Her review can be viewedhere.

At the time that I ordered this on Beauty Bay ,this particular palette wasn’t available in the states , but now its currently on Ulta’s site. Oh well I needed it earlier lol. So lets talk about the packaging and the shades. I was pretty excited for this as this was my first Revolution product. and also the first time using Beauty Bay. And about that the box that this shipped in was super trashed. I was amazed that the palette survived. Now on to the review.

So this palette comes housed in a tin with a plastic sleeve on the outside to really help keep it secure. I in my excitement kind of broke off one of the plastic tabs , so it doesn’t shut as secure as it used to. but overall I really like the Macaw feathers on the cover and the tin is very reminiscent of Too Faced chocolate bar shadows. I could definately see traveling with this palette and maybe just putting some bubble wrap over it for extra piece of mind. The lid kind of lays flat but it didn’t really bug me too much.

The shadows themselves really vibrant and bright, they swatched a bit lighter on my skin then compared on how they look on my eyes. The biggest surprise for me was the colors Hot Tropic, Fiesta and Exotic, they were squishy! I was like o_0 It really kind took me back so much that I made a video ( which I sadly can’t post for some reason) and sent it to a few friends on instagram to ask thier opinion. The general consensus was that they are similar to Colourpop’s Jelly shadows. Which I have yet to try, but it was kind of neat trying a jelly shadow formula. Though I hear most jelly shadows are stored in a small jar rather than in a palette like these are. But so far these haven’t dried out on me and I’ve used this palette quite a bit.  The mattes themselves are kind of remind me of the SugarPill funsized palette in formula but maybe it bit more powdery. Some shades have a bit of kick back but nothing to severe. I found they worked best when I placed them and then blended rather than blending first. A few of the oranges and pinks kind of stain but I would use an oily makeup remover so you’re not scrubbing your eyelids to death. Jelly shadows tend to work best when you press on with your fingers, and the Glitters are best used with some glitter glue so they stay put. I’ll go by the textures of the shadows and list the colors ect. Also all colors look a million times better over a nice white shadow base.

Exotic: This a really nice metallic looking flaming orange color, I think it looks nice layered over one of the other oranges to make it look super intense.

Hot Tropic is a nice silvery shimmer, its more or less for inner corner or just for making your lids sparkly without using the pressed glitters. I like this shade. and I noticed it works best when applied with your fingers or a really stiff brush.

Fiesta: By far my favorite of the squishy shadows, this is one of the nicest golds in my collection,  it goes on great without another shadow, and it rivals my Urban decay Fool Gold in the metallic gold department. It really surprised me how well this shadow performed.

Macaw :beautiful bright cyan blue. I love this color and was worried since the swatch was so bad that it would be sheer. Its not on my lids, its super bright and blue.

Vacay: a bright Fuscia pink color , does stain a bit but looks great blended out. its one of the shades that can actually be applied witha fluffy brush.

Take Flight: Turqouise, its brighter than the sugarpill shade Twitch , and it looks great combined with Budgie or Jungle.

Adventure: a bright neon purple. I love this color and use it quite a bit with both blues and oranges. Does stain a bit.

Budgie: beautiful bright lime green. its reminds me a bit of matte Freak from Urban Decay, or maybe a brighter Twitch from SugarPill.

Tocan Play : Vibrant orange juice color. looks great with Exotic on Top or paired with Fiesta for some Phoenix vibes.

Island : I adore this color, its a really nice bright lavender color but can be patchy if not pressed on first and then blended out. I used this probably the most with Macaw.

Tail Feather : Neon Megenta pink color, its super vibrant, does kind of stain, but looks great with Take Flight, Exotic, or really any of the oranges. Plus when I use the Love Birds , I use this color as a base.

Tweet: This is almost an exact dupe of Slowburn from UD Electric. its very pretty and probably one of the most pigmented in the palette. I would say its more red based orange.

Cardinal: The other super bright orange , its really more orangey than Tweet, but I still think they could’ve swapped this for another color. I had someone online tell me that there needed to be a neon red here. And I can see this . Maybe something like Rage Quit from Sugarpill’s Funsize would’ve worked. It was definately a neon red and would’ve worked for the Parrot/Macaw color story.

Jungle: Bright jungle green, its darker than Budgie but it still super vibrant.

Cockatoo: this is the matte white and I honestly don’t use it too much unless its on my brow. it kind of just blended onto my skin. But maybe I’ll try out a look with this white and some of the oranges for a jaguar look.

These are the really controversial colors of the palette to me. I love glitter and shimmers but pressed glitters can be scary if they fall into your eye. So with these I urge caution and use a glitter glue. I’ve only really used these maybe three times and I don’t have a good picture of Rio in a look. Maybe for a future look I can show these off more.The good thing is these glitters don’t seem to fall out too much and they are smaller pieces.plus theres only two in the whole palette.

Lovebirds: very pretty bright Megenta , I used this a few times for my Bird of Paradise look and my Valentines day makeup. sadly I didn’t take a pic of the V-day look but I incorperated colors from Juvia’s The Douce palette.

Rio Bright sapphire blue glitter, I have yet to use it fully on lid, but maybe in the future.

And now some eye looks: 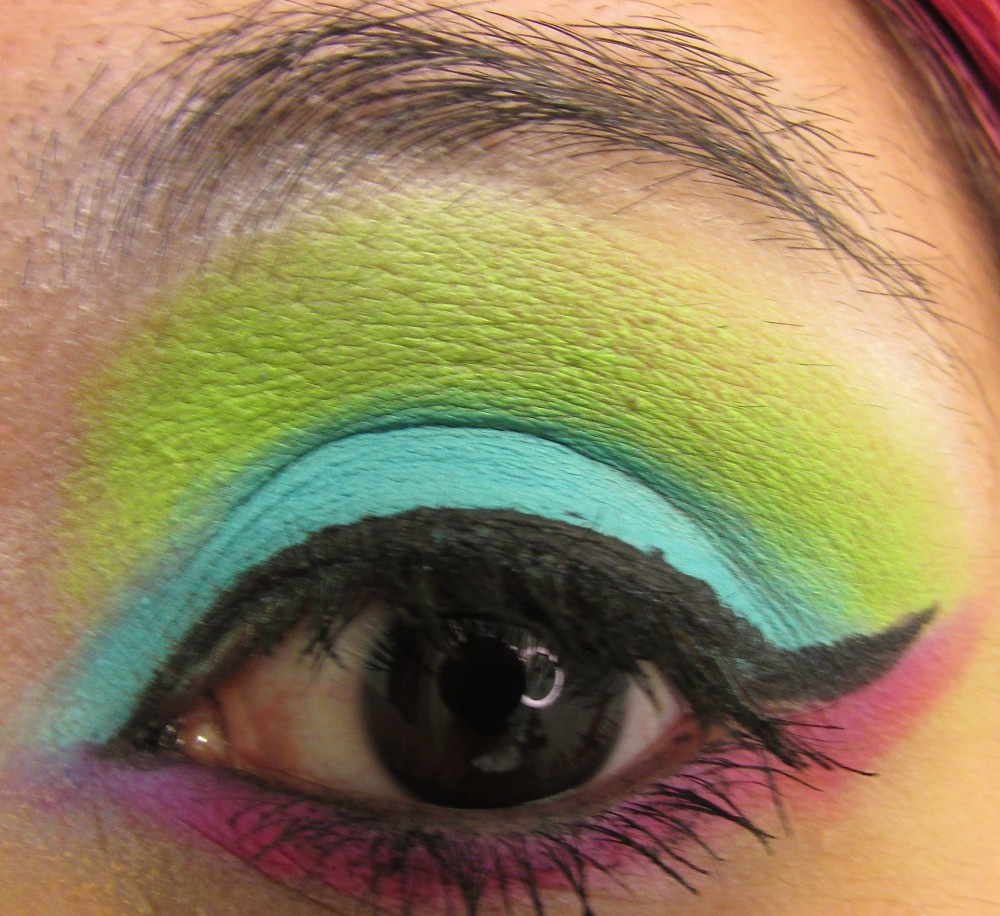 This eyelook I based on the promo pics for the new Urban Decay Wired Collection. I really liked the model’s look so I wanted to try it out for myself. I used Nyx white shadow base and the colors,Budgie, Take Flight, Tail Feather,  and Vacay blended with Tweet.

I wanted my eyes to look like a tropical fruit so I used the colors Jungle, Budgie,Canary, Tocan Play, Cardinal and Tweet. Oh and Cockatoo on the brow bone to make the rest of the colors stick out. This was one of my favorite color combos to be honest.

The Bird of Paradise Redux:

I wanted to do a better Bird of paradise look compared to the first one that I posted earlier. Plus this time I got to use the digital camera , and I liked how it came out. The colors I used were: Vacay, Tail Feather, Adventure, Toucan Play, Cardinal on Lower lid, Love birds on my outer corner, Exotic and Fiesta on my inner eye corner.  I may have used Cashew Chew from Chocolate Bon Bons on my brow bone as well. 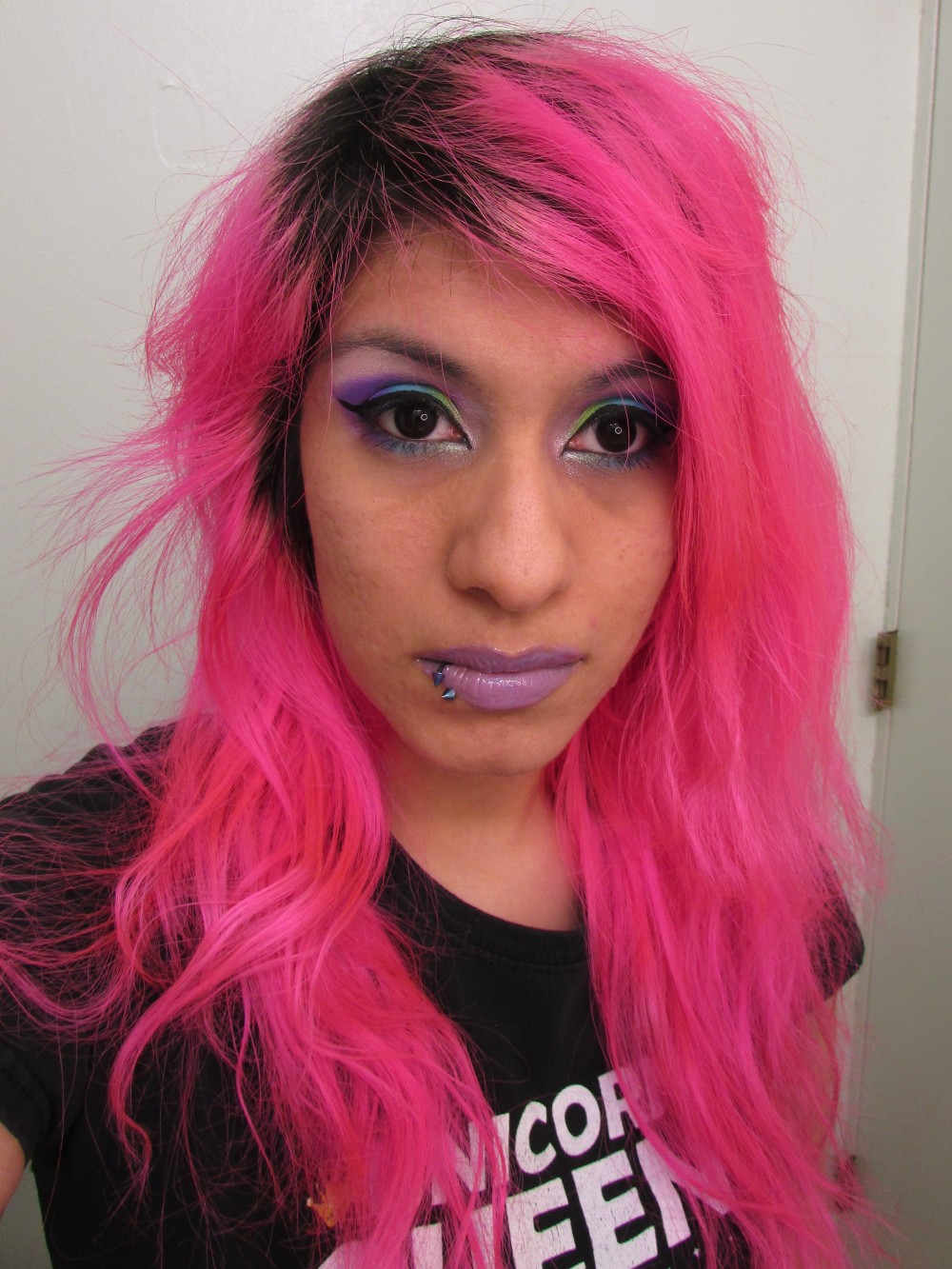 Probably one of my favorite color combos, I’ve noticed I do a lot of purple,blue, green combos. I used a pigment brush to basically shape Island onto my lid, no blending too much thougfh as it can get patchy with this particular color. Then added Adventure, Macaw, and Budgie. afterwards I took my finger and placed Hot Tropic in my inner corners to brighter up my look. Later I added Cockatoo to my browbone , carefully blending with Island.

So finally after weeks of playing with the palette and being super busy with work and errands I can post this for you all to see. I really liked this palette, it surprised me with just how bright it is. Some colors can be sheer but they can definately be built up. Its not quite as pigmented as Juvia’s or some of my Urban Decay colors but it’s still a nice addition to my collection. I would definately reccomed this palette if you want a nice bright palette that can be built up. Its perfect for Spring and I’m thinking of picking up a few other Makeup Revolution palettes . Thanks for reading and have a good week.