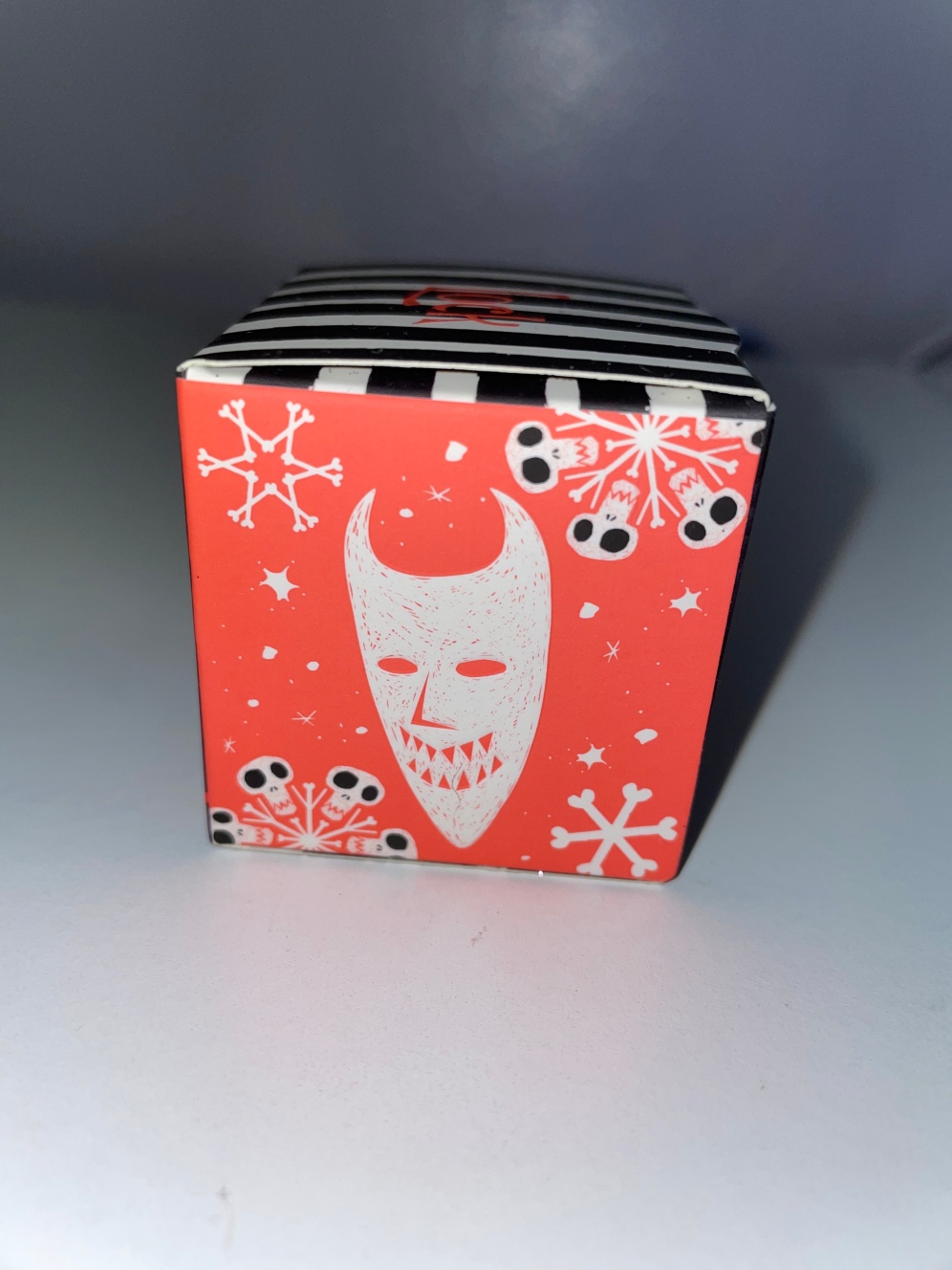 I know this is a bit late , as Christmas is over and so is Halloween too. But I did really like this product and it made me want to try out some more Colourpop items as well. Plus I really wanted to take pics using my blacklight for the packaging ! It’s too cool! If only Colourpop had made some of the actual makeup in the Nightmare Before Christmas collection UV reactive as well . Like it was a super missed opportunity with the lipsticks and eyeshadows. Oh well , maybe next time Colourpop.

I tried to take as many pictures of the box as I could , as art is pretty cool . Still a bit confused as to why the Devil kid Lock has a blackened purple and not a bright red or neon orange. Some of the choices for the collection were kind of odd to be honest. Which is one of the main reasons I skipped out on the palette. No lime greens , like really Oogie Boogie is right there and they could’ve had an amazing lime or neon green. 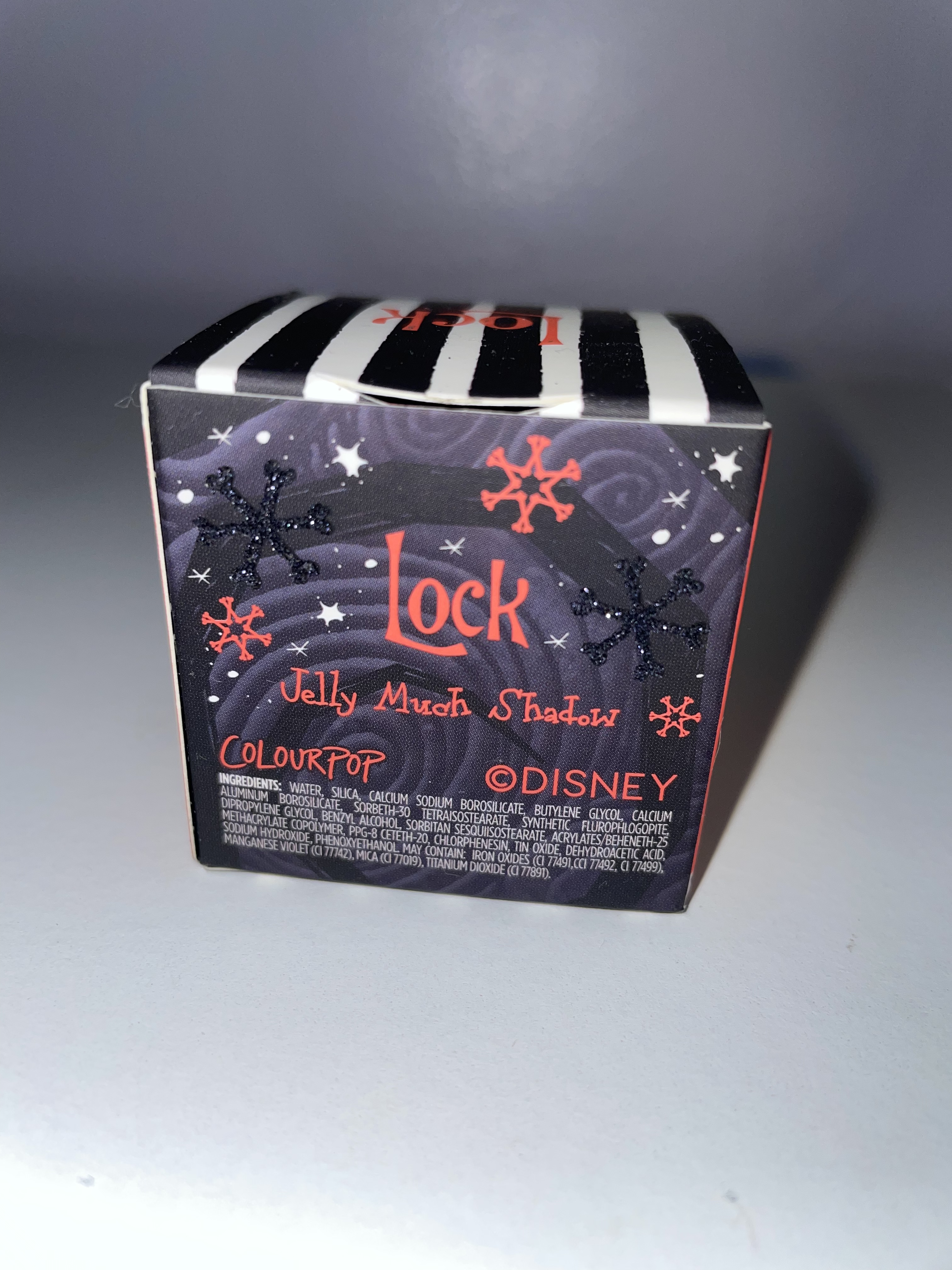 There’s even details inside the box as well.

And now for the Blacklight pictures!

I used the face crystals as mini background, the packaging for them was also blacklight activated. 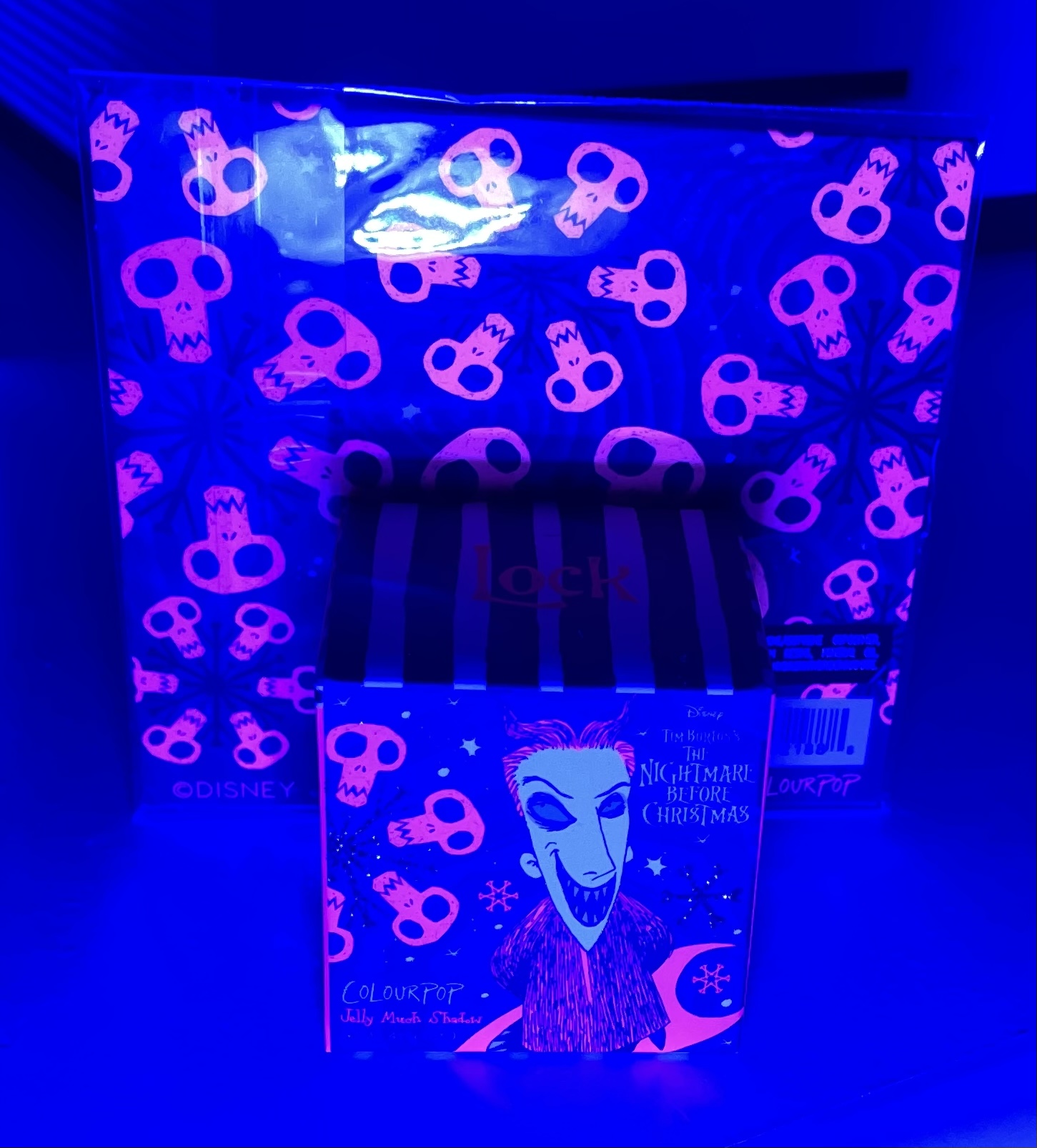 And even the top of the shadow itself glowed!

The packaging really is pretty cool! I almost wish I had gotten the other two Jelly Much shades as well , but they were sold out of Barral and Shock looked like a shimmery pink I already had in my collection.

As for the Shadow itself , it’s definitely very jelly like and squishier than even the two Makeup Revolution Bird of Paradise shadows. It did apply evenly and I was able to use a flat brush for my eye looks.  I would even suggest using an eyeliner brush if you wanted a nice shimmery liner look. Although maybe skip using this on your water line with all the shimmer. 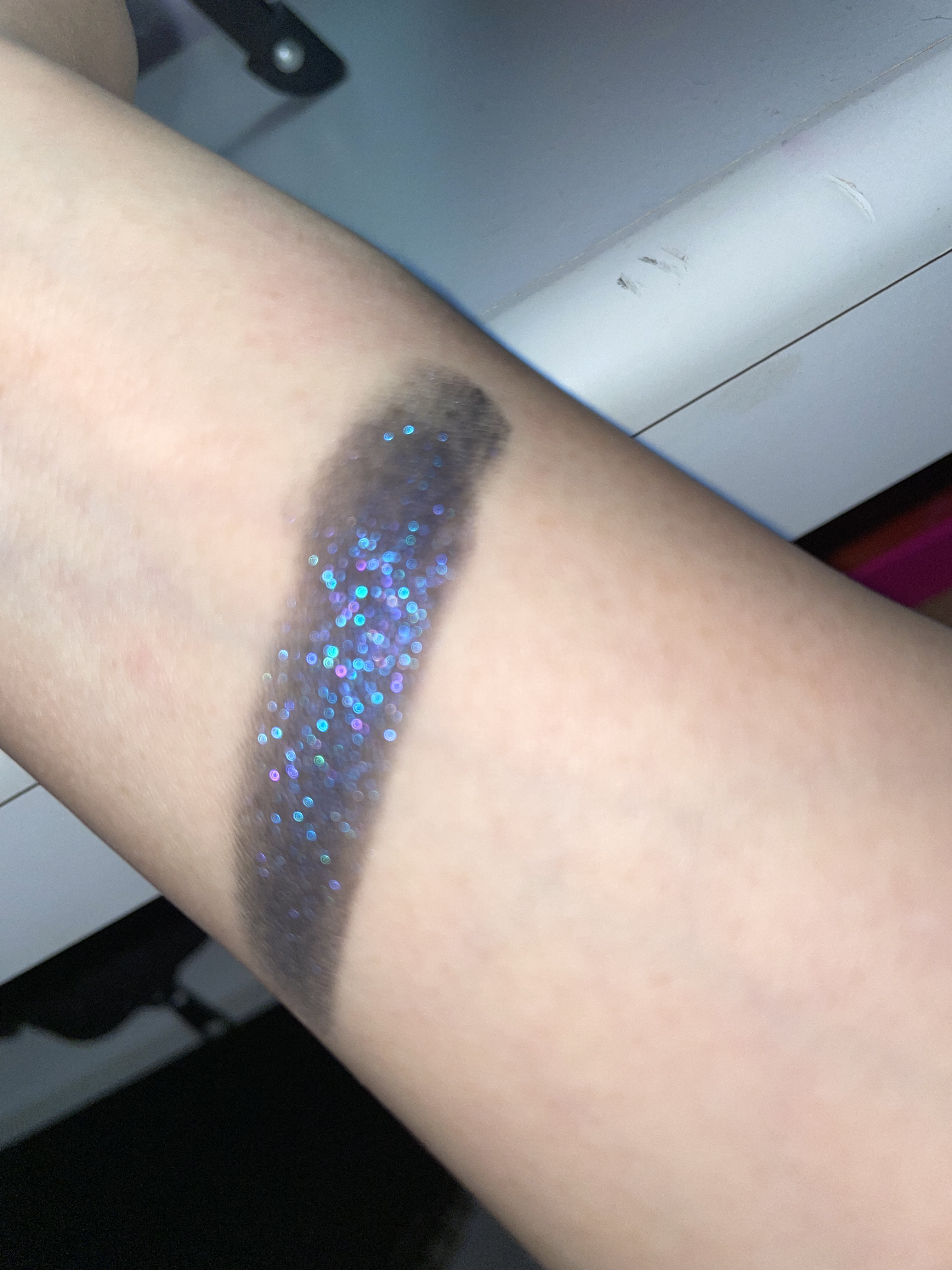 Here’s an out of focus picture I took, I don’t know why but these seem to capture the colors of the shimmer better. you can see it’s got a blackened base with pink, purple and bright blue glitter. 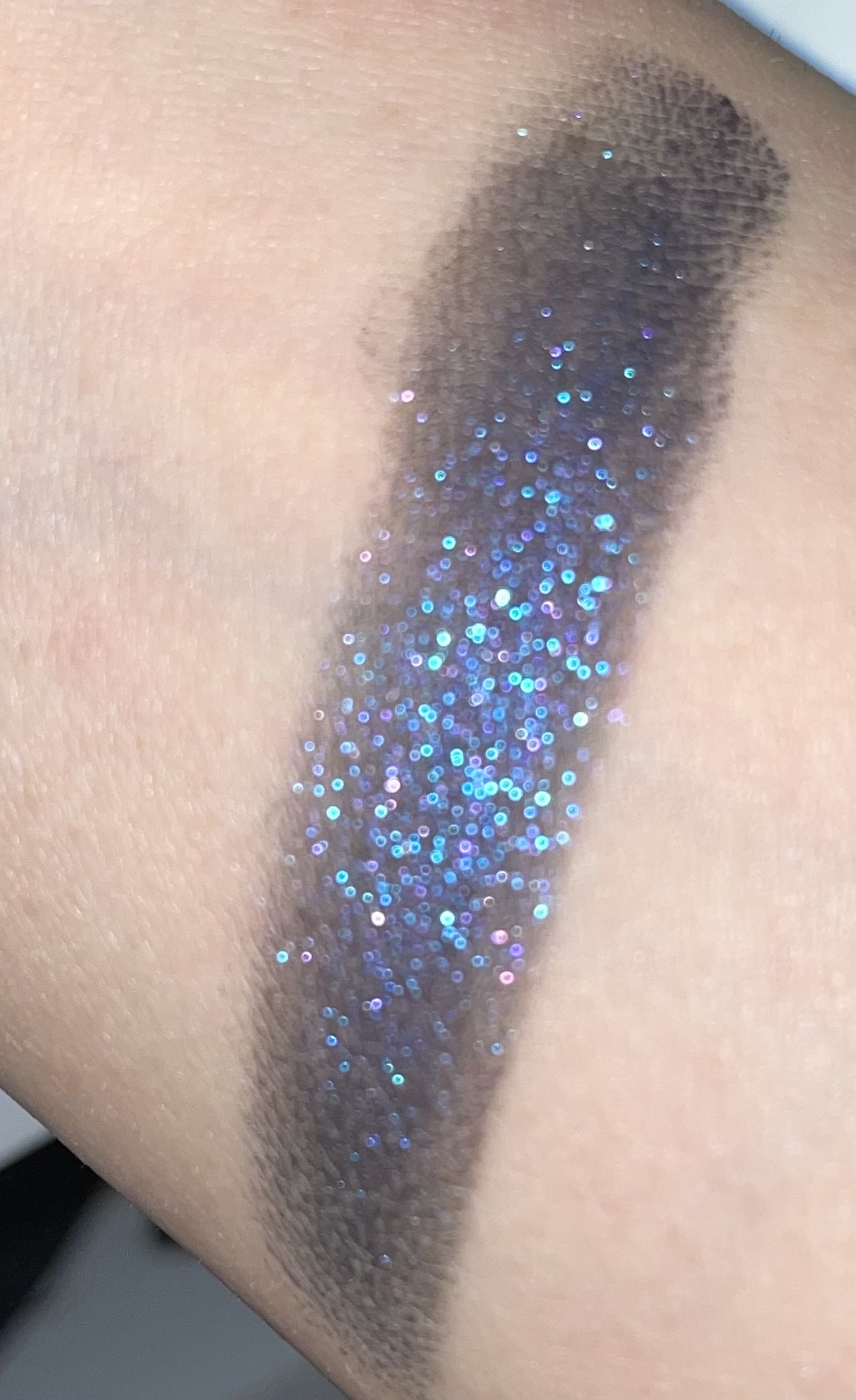 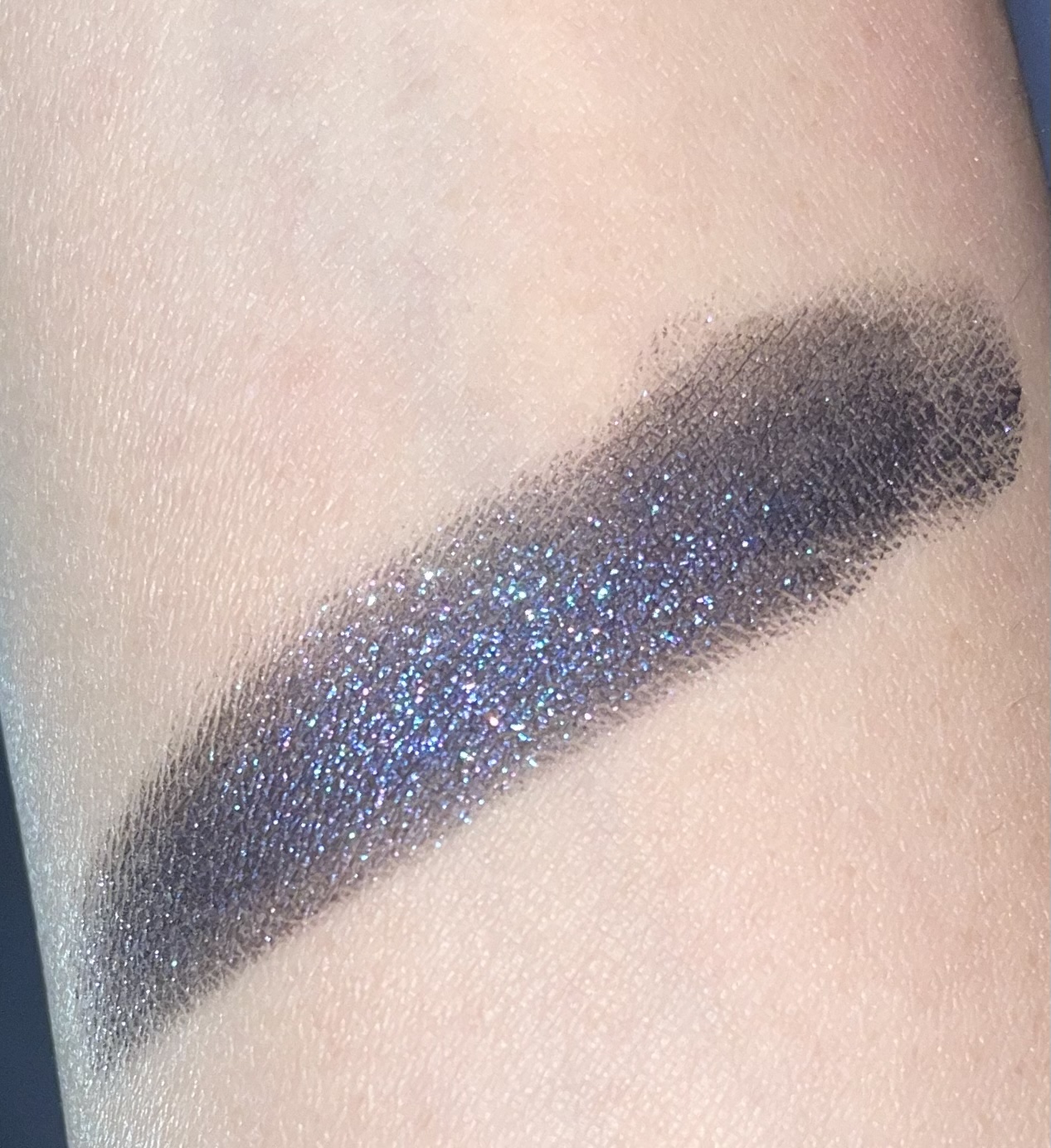 And finally a more in focus shot , it’s a very pretty shade, I do wish the base looked a bit more like the blue-purple on Coourpop’s website though. Now on how to wear it.

My first time experiment: The Mystery Look from Early January

I had actually planned on using these pics for the review and a full face pic but the full face pics weren’t very good . I did like the contrast of the bright blues (Juvia’s Place and Glamlite ) and the little stars ( review coming soon for them). I had to use two different camera’s to show how different this shadow looks. It’s super shimmery but in different lighting it has a great wet-like look to it.

Of course here the blue looks less intense on my eyes. But I liked the wetlook of Lock here.  I don’t however have the pics where I used it as a line though. I’ll have to do that in a future post. 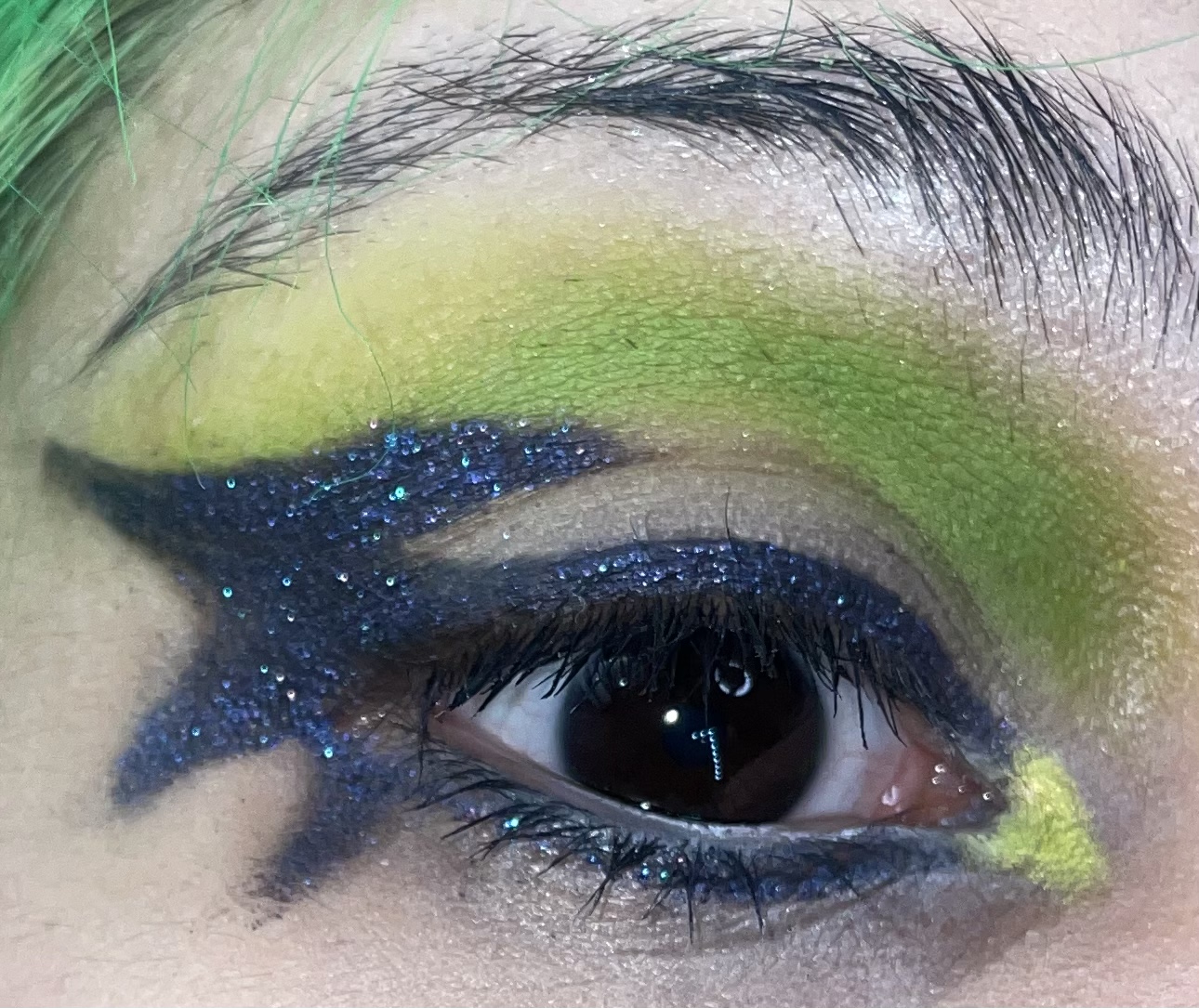 It was pretty hard capturing the glitter , but I think I was able to show off the shimmer , even if I had to use my other camera too . 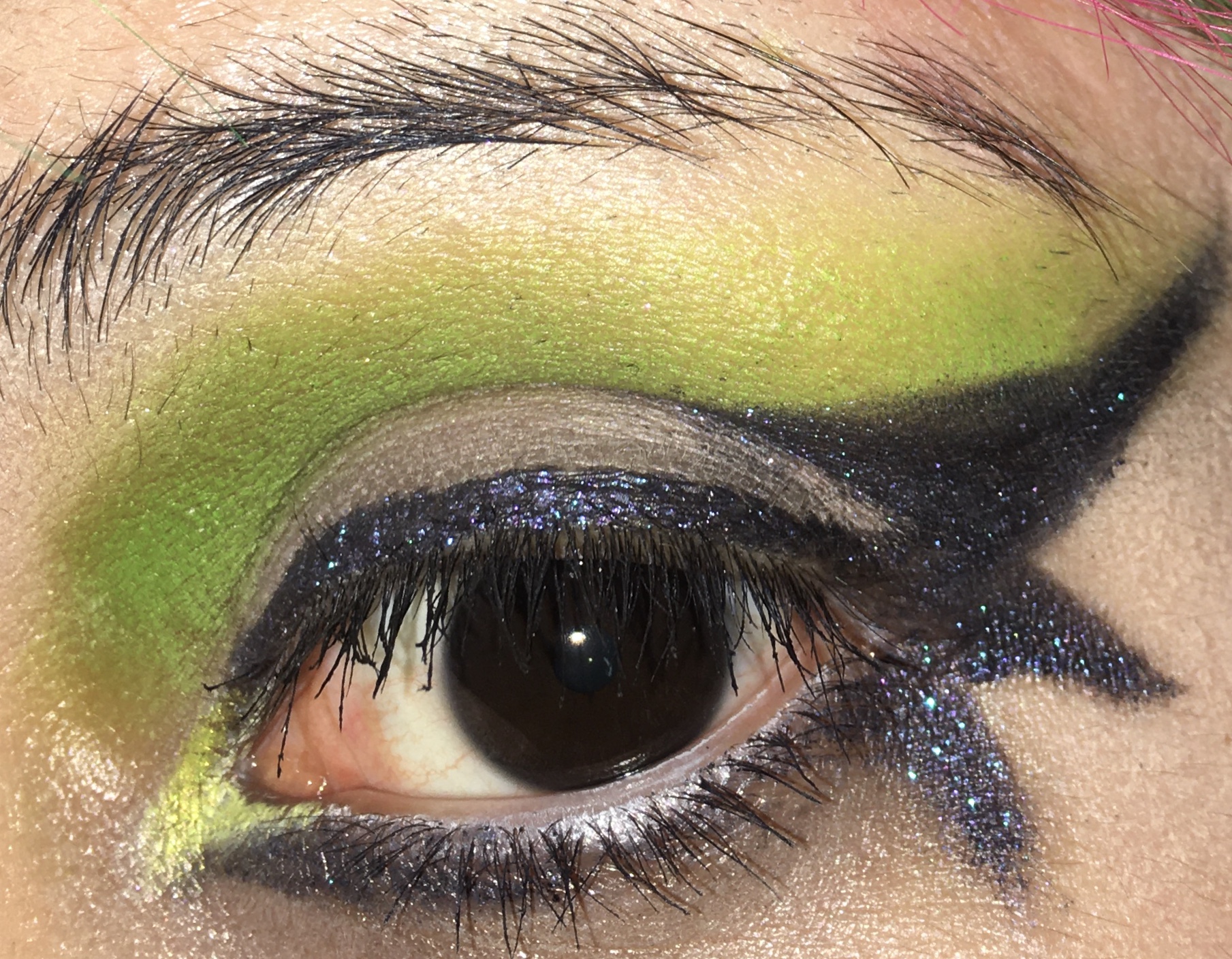 Now getting the full face pictures were pretty hard but I tried 😭.  I recently re-dyed my hair too , so had to show that off as well .

Sadly the shimmer does not show up from further away .

You can kind of see it here, even though it’s a bad quality shot.

Overall I really liked this shadow, I do wish it was a bit more purply than black , but I can still do some interesting looks with it. I do want to try some more cut crease style looks with brights in the crease, as I think the brighter colors look nice with the dark shimmer. I still have the Nightmare Before Christmas face crystals as well , so I’ll play around with those soon. Especially since Euphoria looks and face gems are pretty hot right now. Well have a good week everyone ! Let me know what you think about the Jelly much shadows and what colors you’ve tried .