Hey everyone ! I know its been a while , I’ve been preoccupied with some other things lately and haven’t been posting as much as I want . But today I really wanted to try out a look I’ve seen for the Urban Decay  Naked Ultraviolet palette . I don’t own this palette and to be honest I wasn’t liking alot of the reviews . It just seems too much for a palette I can’t test out and with their being better purples on the market it doesn’t it seem like the best idea to purchase it . But the promo pics do look awesome !

So for this look I used my Nyx Eyeshadow all over my eyes , and I used a lot of palettes. My first palette being the Sugarpill Funsize palette , and the lilac shade Player one. I tried to pretty much draw this on with one of my round brushes.  I then went back and added a peachy matte color on my brow and blended out Player One. This peach shade I used was Urban Decay’s Antidote from the Element’s palette. After that was done I used Urban from the  Urban Decay Electric palette and used that in the outer corners of my eyes , I also blended this into Player One to keep it from looking too harsh. For the middle of my eyelids I used Player one again, but topped it with Stila’s Glitter and Glow liquid eyeshadow in the color Into the Blue. I didn’t know if I should’ve used this or Unicorn Tears or even one of the Douce’s shimmers but I liked the Into the Blue’s shift a bit better. Plus I don’t often use this color and I really love how intense it is .The model’s eyes have a greenish shimmer color in the inner corners, I believe this is the shade Lucid, so my best was to dupe this was use Juvia’s The Douce palette, with the mint shimmer shade, Macarons. It was a bit too green though so I blended in Mystic Rain (its a pink/blue duochrome) from Too Faced’s Life’s A Festival palette. And finally I decided to use Urban on the bottoms of my eyes and finish up with some liner. I always look kind of strange without a black liner . 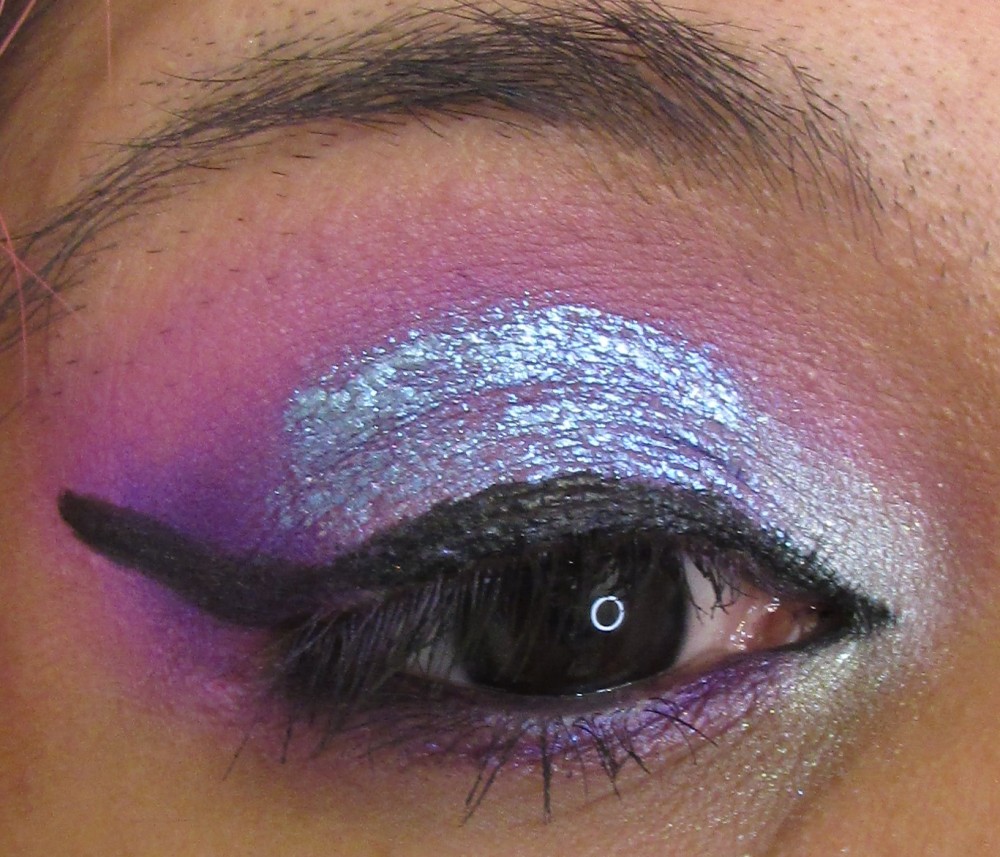 Now I tried to take a picture on my phone with how it looks up close but I was missing something. So I decided to use state of the art technology editing technology.

So yeah I may pass on the Naked Ultraviolet , but I still love the color scheme , I can pretty much dupe most of the lilacs, peaches and a few of the neutrals, but I do want some of the other purple shades. I may buy the Juvia’s Place Violet mini as it looks to have some nice purple shimmers. But that will be later whenever Juvia restocks Wahala .I really want that palette. Also Melt has caught my attention, I have never tried any of their products but the She’s Into Parties Palette looks amazing. Its more a of romantic, mauve, purple and dark plum color story but I think it would look great on so many different skin tones depending on what look you were going for. Be goth, mysterious, or romantic.

So yeah I’ll leave the link up to their Instagram for you guys to see . I’ve seen some swatches online and it looks really pretty. I heard some mixed things about Melt Cosmetics when it came to the Millennial Pink collection and the Smoke Sessions , but I’m kind of down to try them out sometime . Let me know in the comment section what you think . Have you tried Melt or Urban Decay’s Naked Ultraviolet? How did you like the products you have ?