I decided to do a makeup and hair post today. I redyed my hair and decided to add a zazzy raccoon tail to my green side. It came out a better than expected and I was happy to use some of my old One n Only pastel blue. This color was sent to me a few years before I started blogging , as I feared they would stop making it . So One n Only sent me three tubes when i asked about the color. Thankfully I don’t believe it has been discontinued yet and I even plan on digging up some old pictures to review my last tube that I have. Also I’ve been feeling bad about slacking on my Juvia’s Place Culture review, I do wear the palette , It’s just I have not taken pics of every look . Mainly because I’ll go out somewhere and then later come home and play Elden Ring. Which I also want to review as well. Elden Ring is amazing ! So for hair colors and brand I used are.

And to do my whole head , I did a lot sections, tied up all my pink hair up, and started doing my mix of green near my roots and underneath parts of the pink. Afterwards I pulled all my hair back except the green chunk framing my face. I then grabbed some painter’s tape and taped off sections of my hair to make the stripes. I painted the green on first, then removed the tape and added my pastel blue over the white areas. Then used plastic wrap to isolate the hair , and keep it from touching the pink. After doing the pink and setting on my head for hours , I rinsed in cold water . Like super cold . I always use a shower cap to keep may hair up too. 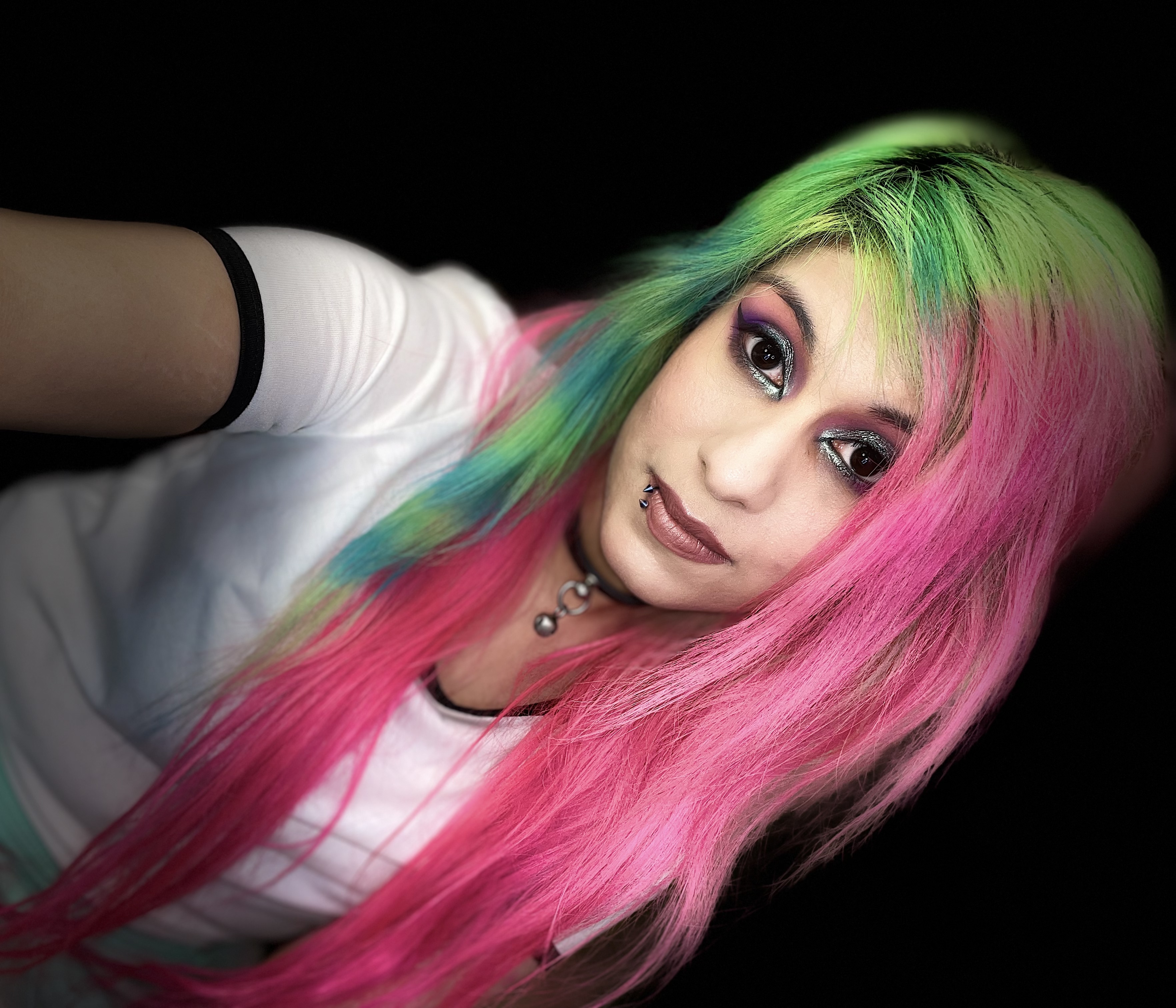 It’s been a while since I’ve done a raccoon tail , Like I think the last time was when I had blue and violet hair . I may even hair the picture somewhere.  But the first time using green and blue .  Now for the makeup I used :

I did this eye look before a family get together but I wanted to recreate it as I didn’t take any pictures.  I really love Yoruba, it’s a very holographic take on the traditional plummy brown/ teal duochromes you usually see in most palettes.  I do like Too Faced’s Artist Pass, but even it and the Sugar Pill shade Moon Shine do not compete with the overall shiftiness of Yoruba. The plummy brown also leans a bit more plum than brown too. So a super plus for me . 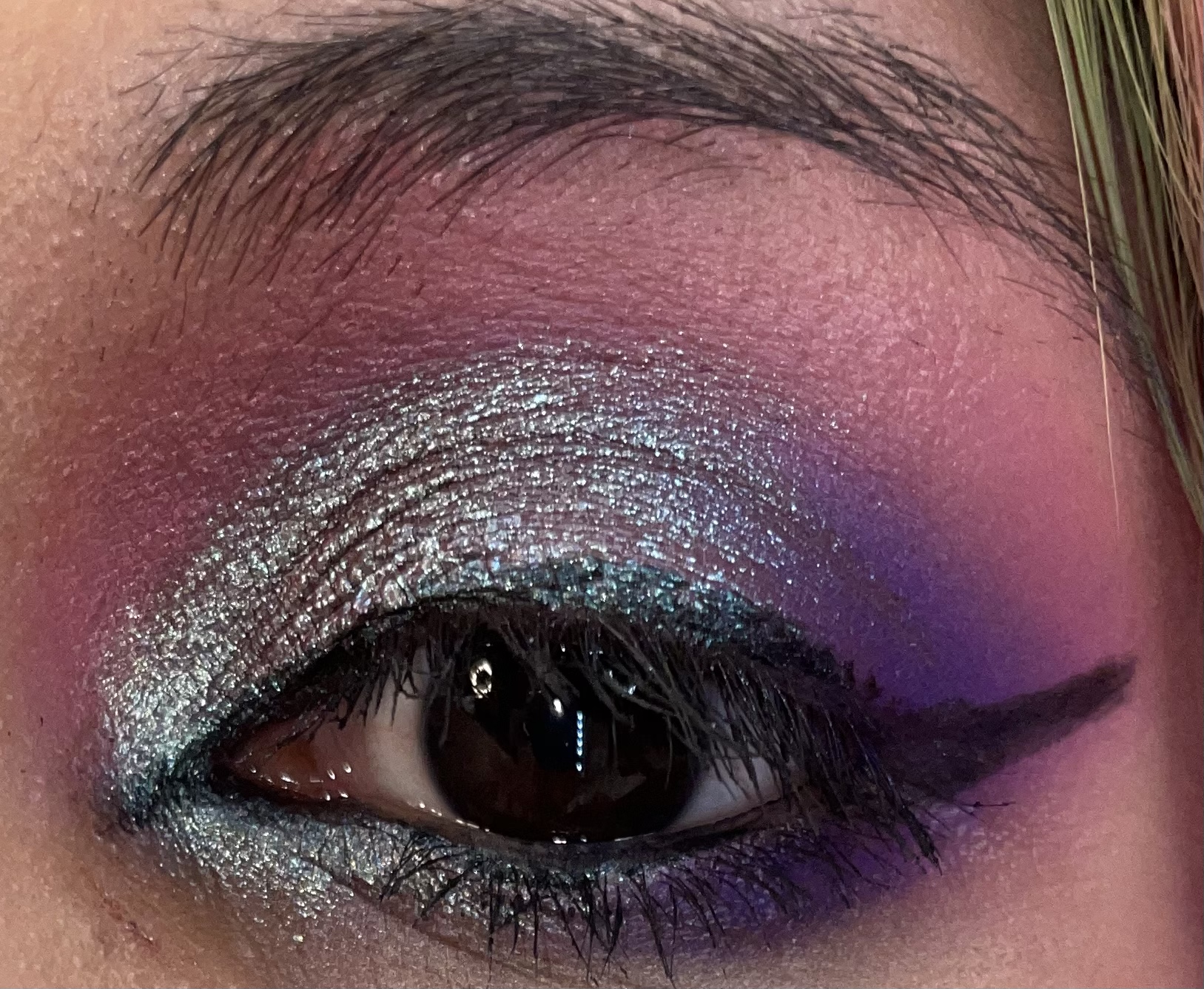 Here it is in warmer light, and you can see it’s definitely frosty. Also my liner does not want to go over it. I will be writing a separate review for the A Bit Edgy Liner soon.

And here it is with flash! It’s extreme and mystical looking , I love this shade. I actually really love the whole Culture palette, but more on that later as I’m still working through the shades.

I feel like from further away the duchrome looks a bit silvery. But still love the shade. And I have a new stripey tail. I wanna call it an iguana tail though, as that’s the animal I think of with green and blue striped tails, not raccoons.  I do also want to add that Arctic Fox dye just added a new neon green shade called Space Cowgirl and I’m super wanting to try it out. maybe after the current green fades I’ll try it out as it’s a bit more bright chartreuse . Also not advertised but a youtuber did confirm that it was UV reactive, so definitely something I want to test out.  Well let me know what you all think in the comments. Have a great week everyone ✨🦄.